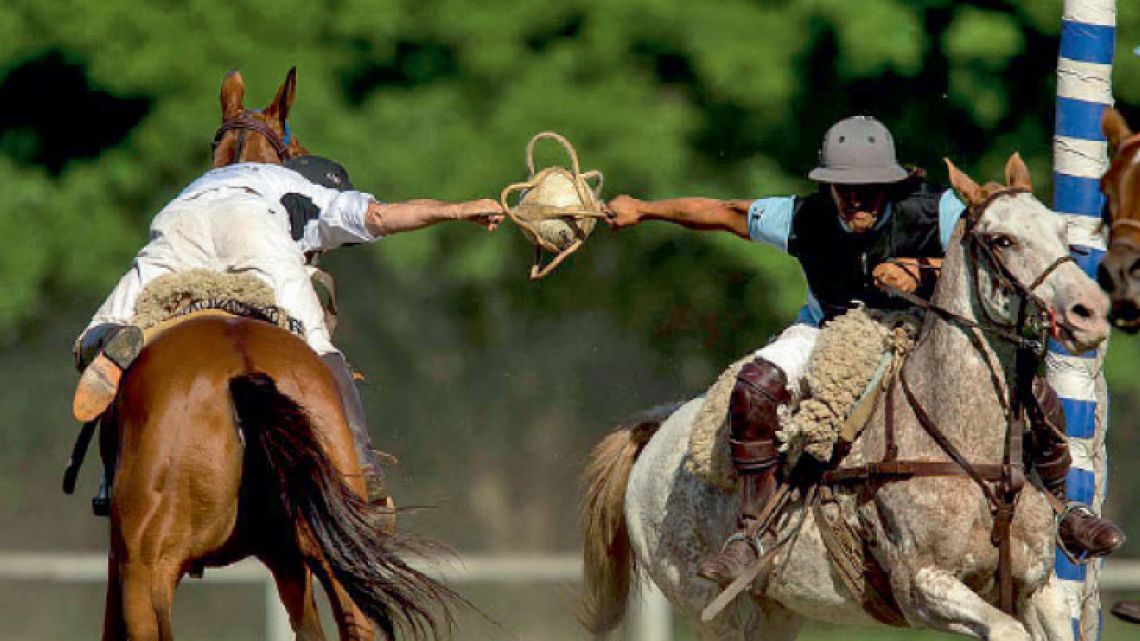 Since the beginning of the 17th century, a “manly sport has been practiced, for people on horseback, bold and brave.” This is the pato.

This sport, was more or less like this: two gangs of men on horseback got together and two places separated by about a league (approximately five kilometers) were pointed out. Then they sew a leather into which a live duck was inserted and leaved the head out. This “leather ball” has two or more handles, from which the two forts of each gang are taken in half the distance of the assigned points and pull strongly until the most powerful takes the duck, and its opponent falling to the ground if he does not abandon it.

The winner runs and those on the opposite side follow him and surround him until they take him from one of the handles, they pull in the same way, with the gang that finally arrived with the duck at the indicated point being the winner.

This record indicates the origin of a practice, later turned into a sport, which dates back 400 years.

The geographical place described in this story is the current Plaza de Mayo, central square of the City of Buenos Aires, where the Casa Rosada, the Government house, is located.

Over the years, “El Pato” as this game was called, was practiced and also prohibited by the religious and civil authorities due to the high level of danger and the fatal consequences that came from wanting to reach by any price with the duck to the designated point. Despite of this, in 1953, due to its traditions and roots, it was declared “National Sport”.

So then, what is this gaucho game about today:

“El Pato” (The Duck) is an equestrian sport. The teams are made up of four players. The game is divided into six periods of eight minutes each, with a half-minute break of five minutes. The field is grassy and at each end there is a one meter diameter hoop 2.40 meters high. The objective, precisely, is to bring the “duck” to the hoop of the opposing team.

What is the duck?

The name of the sport refers to a leather ball with six handles, like ropes, that the players look for with intensity to score a goal.

Nowadays, there is not duck in there of course!

In their regulations, players are allowed to remove the duck from the ground but still ride the horse. Once it is obtained, they are forced to extend the arm so that the opponent tries to snatch it; They can also pass it to any couple. It is a fast game, full of adrenaline, with horses galloping at maximum speed.

Such an interesting gaucho activity!