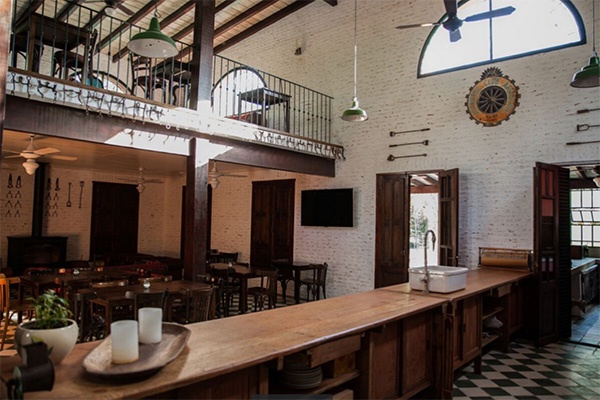 The pulperia was the only possible meeting place for the Gaucho in the immensity and solitude of the pampas. There, as some gaucho poem indicates, people verified that they could continue talking, after days and sometimes months of not exchanging words.

In some of them there were dance floors, and even small rural theaters.

One of the first pulperías installed in our current territory was inaugurated by Ana Díaz, one of the women who accompanied Juan de Garay in the second foundation of Buenos Aires, back in 1580.

By the year 1810 they existed in the province of Buenos Aires (that at that time included to the capital) about 500 pulperías. Almost half were served by Galicians.

There were rural and urban and even some very precarious, called pulperías volantes, which moved following the harvests. The simplest ones only sold cane liquor, staple, gin, wine, yerba, tobacco, salt, cookies and sugar. The brandy was the most consumed beverage, and the custom was to fill a large glass and invite those present through it from hand to hand and it was not well seen to refuse the offer.

The wine was sold “loose” and the one that was taken in the pulperías was the Carlón, a native of Benicarló, province of Castellón, Spain. The wine was transported in wooden barrels driven by wine carts consigned to merchants who made the distribution to the pulperías. Some pulperos diluted it in water and called it Carlín or Carlete, and it was sold at a lower price. Also came wines from Bordeaux, France, but those were destined to the privileged classes, like sugar and “fine” alcoholic beverages. Salt was basically used for the preservation of meats in the preparation of charqui.

Other pulperías were true stores of general branches with an important provision of food, clothing and supplies for the field. The pulpero used to have the gift of the yapa, the fiado, the barter and the notebook of annotations. Even some patrons paid their employees with vouchers that could only be exchanged in the pulpería.